Congratulations to Queensborough Sophomore Outside Hitter, Paige Hughes, who has been selected a 2019 NJCAA Division III Second Team All-American.

All-America selections are made by the NJCAA Division III Volleyball Committee.

For the 4th year in a row, we are District Champions and heading back to the NJCAA National Championship in Minnesota.

The QCC Tigers ticket to Minnesota was punched after defeating Massasoit Community College in Brockton, MA. Game 2, the Tigers beat Massasoit, 3-0, to face off with FIT for the District Title. It was a repeat of the Region XV finals in which the Tigers won 3-2. This time, the Tigers refused to drop a set and took out FIT 3-0 (25-18, 25-17, 25-20) to win the Northeast District for the 4th consecutive year.

QCC Tigers win the 2019 Region XV Championship, defeating FIT 3 sets to 2 on Saturday, October 26 for their fourth consecutive title. The Tigers dispatched Monroe-Bronx, 3 sets to 0 earlier on Saturday to get to the finals. Paige Hughes was named Regional MVP, Georgia Alexiou and Michelle Sosa were added to the All-Tournament team. 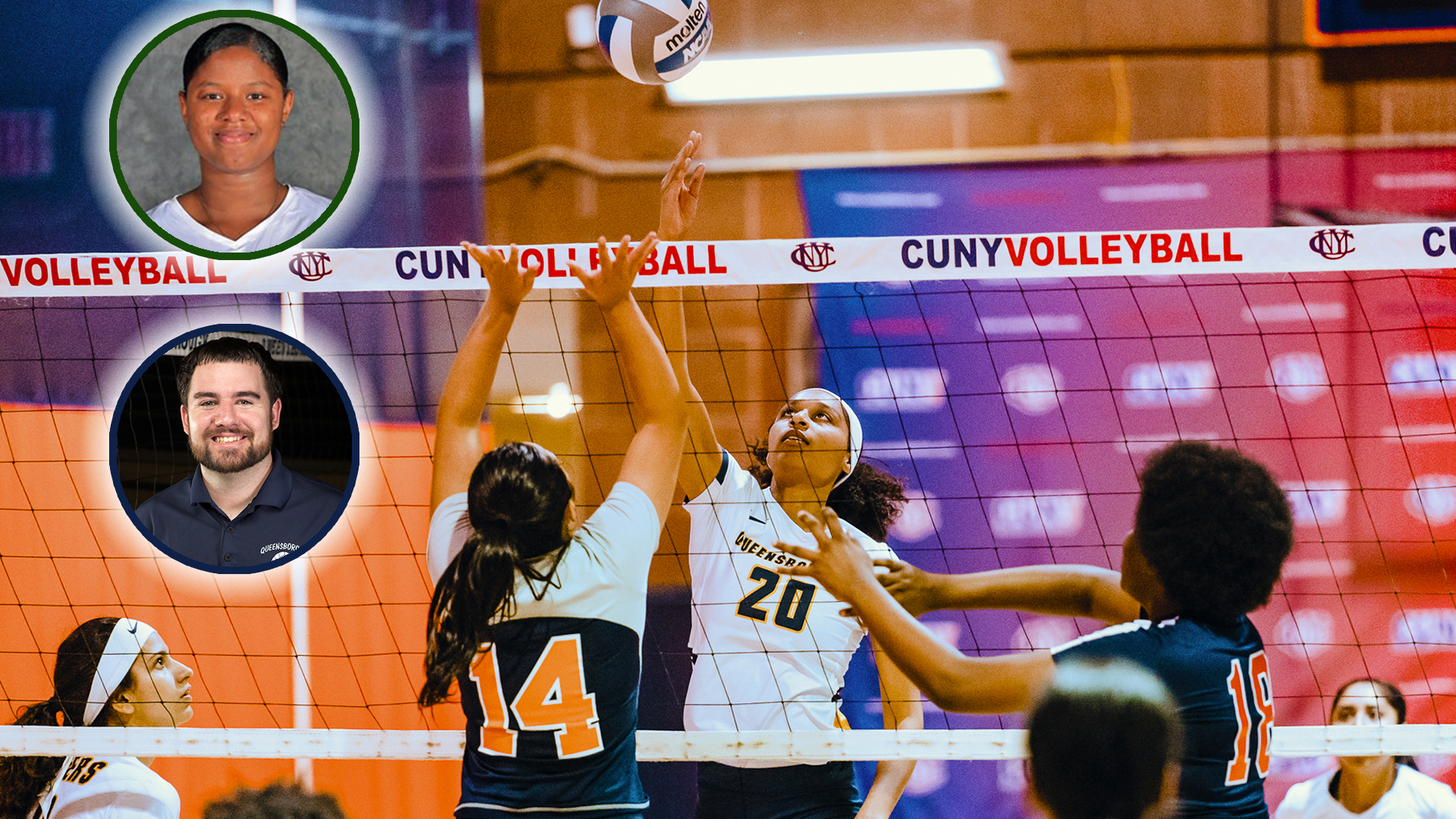 On Wednesday, Oct. 23, 2019, the City University of New York Athletic Conference and Pepsi revealed the 2019 Community College Women's Volleyball All-Star selections, as voted upon by the league's head coaches.

Queensborough, which captured its seventh-straight CUNYAC regular season title earned the top two honors once again, as sophomore Tiffany Garcia-Lawson was selected as the Player of the Year and Head Coach Jason Demas got the nod for Coach of the Year. Rookie of the Year honors for 2019 went to Bronx freshman Nayely Rodriguez, who had an outstanding collegiate debut season for the Broncos.

Garcia-Lawson becomes the second player in three seasons from Queensborough to hoist the Player of the Year trophy, as former teammate Paola Beniquez won the award two years running.

The product of Floral Park, NY spiked her way through the season to record 139 kills, with a hitting percentage of .285 to lead the team. She also came up big on the defensive end, using her 5'10" frame at the net to pick up 50 blocks (including 42 solo).

For the seventh consecutive year, and last eight of nine, Jason Demas of Queensborough wins CUNYAC's Coach of the Year award from his peers. At the helm this season Demas coached the Tigers to a 6-0 record in conference play and 19-5 overall. This season he eclipsed the 200 win mark, to become QCC's all-time winningest coach - in any sport. He picked up yet another CUNYAC championship, and looks to lead his team in the next upcoming match against conference team BMCC in the Regional XV Championships.

Read the full story on CUNYAC 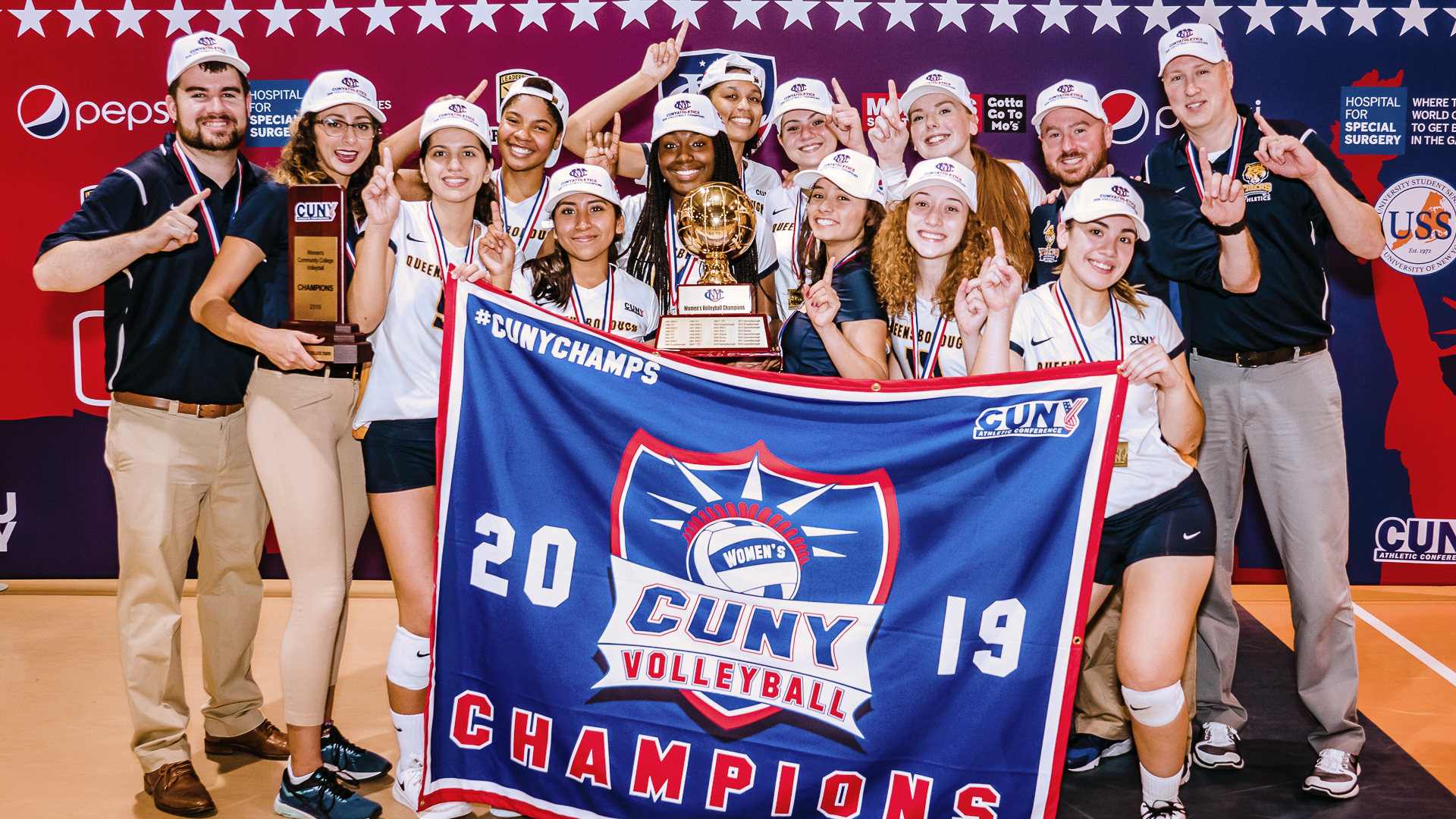 Leading the way for Queensborough in the final was sophomore Pagie Hughes with six kills, five digs and one serve ace en route to CUNYAC Championship Most Valuable Player honors. “Paige is someone who does so many things on the court that isn't shown statistically. Her communication, her energy, her drive, is what carries her. Obviously, she's a great hitter, a great passer, but those things that don't show up, is what makes her special and what helps her lead.” said Queensborough Head coach Jason Demas.

Read the full article on CUNYAC

The two-time CUNYAC Player of the Week accumulated her best performances in the season against second-place BMCC, where she hit a season-high 10 kills and hit .714, which was also a season high to go along with three service aces and three digs. With the win, the Tigers clinched the CUNYAC Regular Season title. She finished the week with 23 kills, 5 aces, 8 digs and a block in three matches.

The freshmen setter accumulated 78 assists and 28 digs in a rare 1-2 week for Queensborough. The three-time CUNYAC Rookie of the Week from nearby Flushing, had a monster game in a five-set loss to Suffolk CC, with 33 assists and 13 digs, marking only the forth time all season she has been able to surpass 30 assists during a match.

The lefty hitter had a stellar week, as the Tigers picked up wins in three regional matches and went 3-1 overall. She recorded 14 aces on the week, including a career-high of nine against Kingsborough. She would also record 20 kills on the week, with 10 of them against a very tough opponent in Monroe Bronx. In the match, she led the team in hitting percentage and hit a career high .533 while recording double digit kills.

The freshmen setter had stellar week as she recorded 63 assists and 13 aces. She would record a career high 6 aces against Dutchess CC, and then would match that mark the very next game against Monroe Bronx. Her 30 assists and her floor leadership skills were a large part of the teams success over a previous unbeaten opponent in the region.

Paige Hughes, Queensborough (So, OH, New Hyde Park, NY)
While the defending champion Tigers have won eight straight matches, all in Region XV, Hughes, QCC’s captain has led the way as of late. Last week, as the Tigers went 4-0, Hughes had four double-doubles. The Herricks HS product was remarkably consistent in victories over Nassau (13 kills, 13 digs), Suffolk (12 kills, 11 digs) and Westchester (11 kills, 10 digs), before her best match of the week against Rockland with 12 kills, 25 digs and three service aces. The native of New Hyde Park leads QCC in kills (2.85) and hitting pct. (.282).

Tiffany Garcia-Lawson, Queensborough (So, MH, Floral Park, NY)
The sophomore had 25 kills and 10.5 blocks to lead the Tigers to four sweeps for the week, which included wins over Kingsborough and second-place BMCC. The middle hitter had a standout performance against Sullivan with team-high of nine kills, hitting .533, and had four solo blocks for the match. For the sea-son, Lawson ranks first for QCC in kills (53) and stands second in hitting per-centage at .325.

For the week, Brierre recorded 14 kills, 15 digs, 11 service aces, after being out for two weeks due to injury. The freshman from Elmont returned to help the Tigers to a 4-0 week which included two 3-0 conference victories, as Queens-borough now stands atop the CUNYAC standings with a record of 3-0. Brierre's week included tallying a season-high six service aces in the Tigers' conference matchup against Kingsborough.

Chidera Nwaghanata, Queensborough (So, MH, Ozone Park, N.Y.)The sophomore had seven kills (.333 hitting pct.) to help the Tigers sweep Bronx in QCC’s CUNYAC opener. Against Div. II Northern Virgina this past week-end, the Queens naitive, had six kills and five service aces, while hitting .267 for the match. For the season, Nwaghanata leads the team in kills with 29 and ranks second on the team with a .273 hitting percentage.

For the second week-in-a-row, Durkovic takes Rookie of the Week honors. The rising freshman tallied seven serve aces, 27 assists, and 11 digs for the week, helping the Tigers to a 1-1 mark last week. In five matches played, Durkovic leads the Tigers in assists (72) and with serve aces (14).

Rachel Medina, Queensborough (So, S, New Hyde Park, N.Y.)The sophomore stepped up big for the Tigers off the bench as an injury replace-ment to play outside hitter, a position she has never started at. Medina would help Queensborough secure two important non-conference wins in New Jersey. She had a standout performance against Rowan College, where she recorded 7 kills off 12 attempts, hitting .500 with 5 service aces and 18 digs. All of Medina's stats were also team highs for the game.

The Tigers, who are appearing in the NJCAA's preseason rankings for the first time in program history, are tied with Minnesota State Community and Technical College for the No. 9 slot in the poll, earning eight points apiece.

In 2018, Queensborough set a single-season record for wins, compiling a 29-4 record. That mark included a perfect 19-0 regular-season ledger in NJCAA Region XV play and a flawless 8-0 mark against CUNYAC opposition.

The Tigers lost just one set in seven postseason matches between the CUNYAC, Region XV and District G tournaments, en route to securing a bid to the NJCAA National Championship.

Queensborough opened play at the national tournament with a thrilling 3-2 win over SUNY Broome, before falling to top-ranked Owens and ultimately finishing eighth.

The Tigers will look to replace star outside hitter and two-time CUNYAC and NJCAA Region XV Player of the Year Paola Beniquez. who rounded out her career at QCC as the program's all-time leader in kills and service aces.

Queensborough will open up their 2019 campaign Friday (Aug. 23) against Jefferson Community College at 11 a.m. at RFK Gymnasium in Bayside, N.Y.